Manufacturing delay, will ship in 2 weeks

SU-6 is newly developed USB interface, which is positioned at the high-end interface. Compared with previous products, we mainly use the following four new self-developed technologies:

2, the newly designed FPGA algorithm, built-in FIFO buffers the data and then outputs, SPDIF output is re-encoded by FPGA, so that the coaxial output can support PCM 384K and DSD DOP128 at the highest.

4. Original single clock system, all circuits of the whole machine adopt synchronous clock design, in which USB clock is synthesised by PLL derived from femtosecond clock. 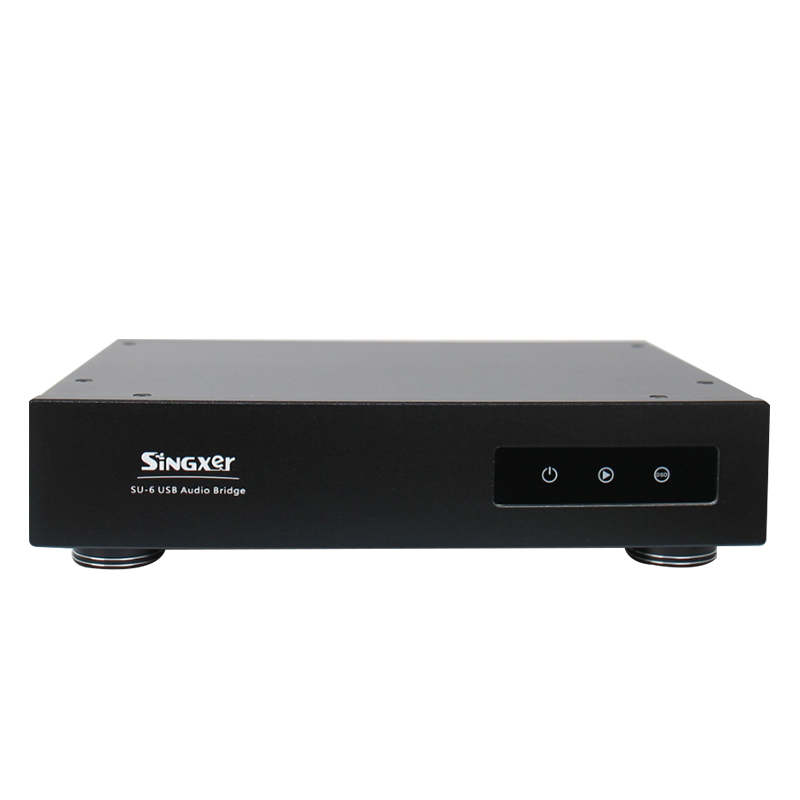 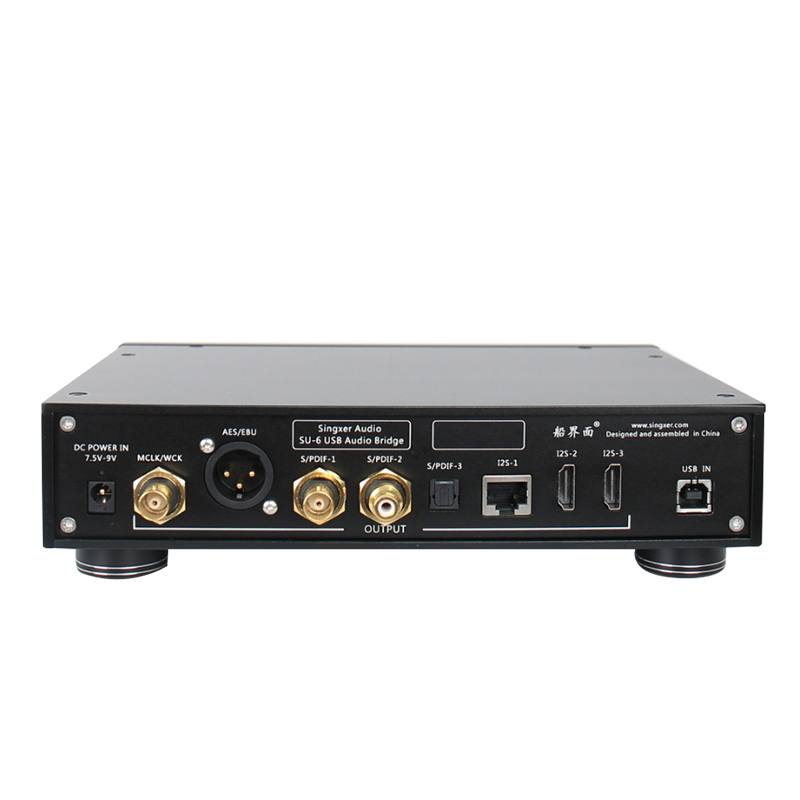 Electrical standards for each interface:
1, USB input socket is a standard USB-B type female socket, USB power supply range is 4.5V-5.1V;
2, DC POWER input socket uses DC2.1 socket, supports 7.5V-9V DC input (for fast charging of super capacitor, power supply requirement is 3A).
3, BNC interface and RCA interface output standard S / PDI signal, the level is 550mV (connected to standard load), the output impedance is 75 ohms;
4, XLR interface output standard AES / EBU signal, the level is 3.3V (connected to standard load), the output impedance is 110 ohms;
5, the word clock (WCLK) output uses BNC interface, the level is TTL (no load), the output impedance is 75 ohms;
The 6, 2 HDMI-I2S signals are output through the HDMI socket. The output four signals include MCLK, BCLK, LRCLK, and SDATA signals. The standard LVDS differential level is used, and the impedance is controlled at 100 ohms. The PIN13-15 of the HDMI socket is the DSD_ON signal, the high level is the I2S working in the DSD mode, the level is LVTTL; the PIN18 is the 5V weak power output (the output current is less than 20ma), which can be used as the interface plug-in indication; 2 output The I2S line sequence is the same.
7, RJ45-I2S output I2S signal is CMOS (5V) single-ended signal, low-impedance output, the output of four signals including MCLK, BCLK, LRCLK, SDATA signal.
8, the optical fiber port outputs the standard optical signal. 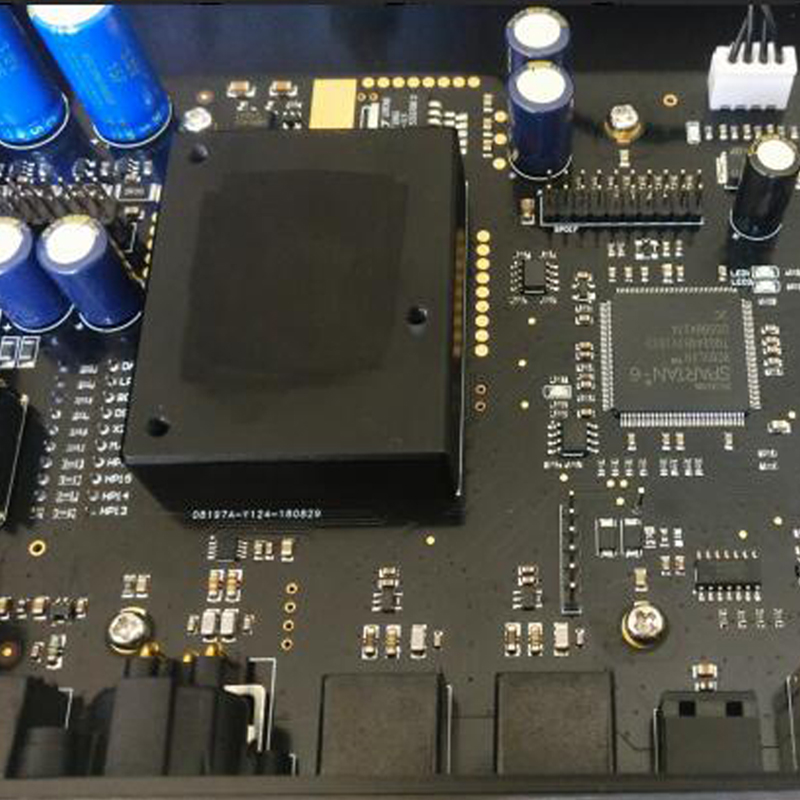 Design details:
1. Implement the design concept of electric power as the mother of sound, pay attention to the design of power circuit, adopt external DC input, built-in super capacitor power supply, with high performance, low noise and fast response LDO. The whole board is powered by up to 6 independent LDOs. The digital audio board is powered by a secondary LDO. The clock part even uses LT's ultra-low noise LDO, which lays a solid foundation for ensuring the ultimate performance of the output.
2, in order to ensure excellent electrical transmission performance, XLR sockets are made of Swiss Neutrik products, USB-B sockets are made of TE, and enthusiast BNC and RCA coaxial sockets are made for Taiwanese manufacturers. Even the fuses are selected from the United States. Litteluse model.
3. The audio board is designed with a 4-layer board to ensure a complete ground plane and power plane. High-speed digital design is used to ensure signal integrity and power integrity of the board. Special processing of the clock signal, using packet design and accurate impedance control, to ensure the signal quality of the clock and improve its anti-interference ability.
4, input and output signals are in accordance with the standard design, especially the USB high-speed signal uses 90 ohm impedance control, also built-in anti-static TVS protection circuit; I2S signal uses LVDS differential level standard, impedance control is 100 ohms, 4 outputs are used A separate LVDS driver.

System compatibility:
1, Windows 7, Windows 8, Windows 10; 32/64 bit, need to install a dedicated driver
2, Native MacOS 10.6 and later, using the system comes with a driver
3, Native Linux with UAC2 compliant kernel, using the system's own driver, (tested on Ubuntu and Daphile systems, based on INTEL X86 platform)
4, Android OS 4.2 and above, the device needs to support OTG function, in general, the Android 5.0 system is supported by default, and the following 5.0 recommendations are used with a dedicated player. 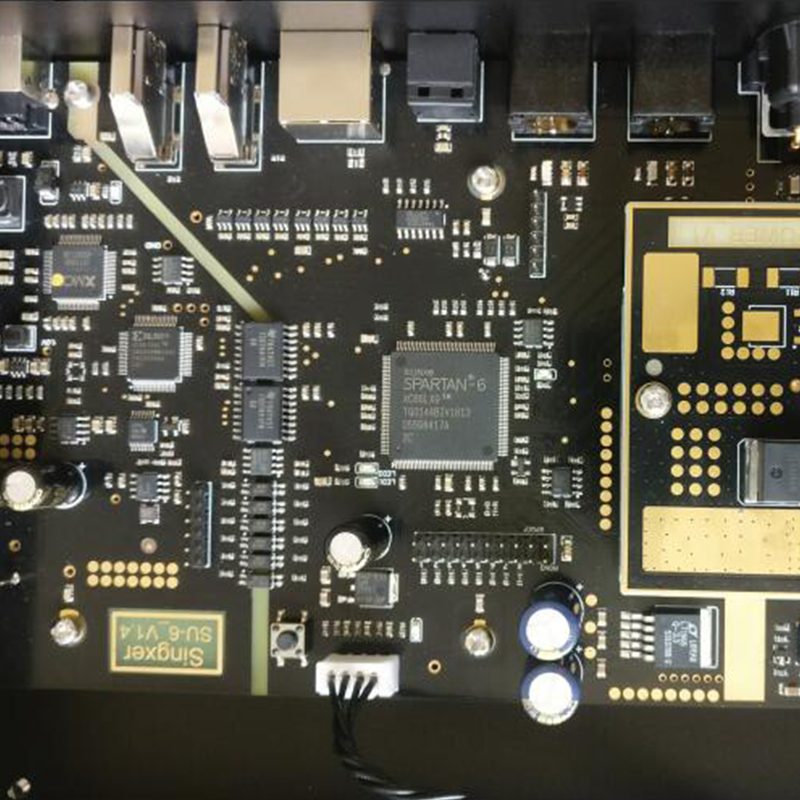 HDMI -I2S interface output:
1. LVDS differential signal with a level of 3.3V;
2.DSD ON signal, 5V power supply (small current), the internal PGA of the MUTE signal has been processed, and the MUTE signal will not need to be output;
3. The DSD ON signal can be defined by itself. The DSD ON signal can be arbitrarily output to the PIN13, 14, 15, and 16 pins of the socket.
4. The phase of PIN1-3 and PIN7-9 is adjustable, and the user can configure the phase of the two pairs of outputs through one switch.

Flexible I2S and clock configuration:
1. Switch 1-4 corresponds to the PIN13-16 pin of the HDMI socket. When it is pulled to the ON position, it means that the PIN pin has the output function of the DSD_ON signal;
2. Switches 5 and 6 are modes for configuring the clock output:
When the switch 5 is at O, the clock outputs MCLK, and when it is ON, the clock outputs WCK;
Switch 6 configures the frequency of MCLK, which is 22.5792M/24.576M for O and 45.1584M/49.152M for ON.
The configuration of switch 6 is valid for CLK OUT, RJ45-I2S, and HDMI-I2S.
3. The switch 7 can separately set the left and right channels in the DSD mode of the I2S signal.
4. Switch 8 can set the line sequence of BCLK in I2S signal; when O, PIN4 is BCLK+, PIN6 is BCLK-;
5. Switch 9 can set the line sequence of LRCLK in I2S signal; when O, PIN7 is LRCLK+, PIN9 is LRCLK-;
6. Switch 10 can set the line sequence of DATA in I2S signal; when O, PIN1 is DATA+, PIN3 is DATA-;
Note: Coaxial, optical fiber, AES/EBU output is not affected by the above code switch; RJ45-I2S wire sequence is fixed, need to adapt to different interfaces, you need to customize the network cable.